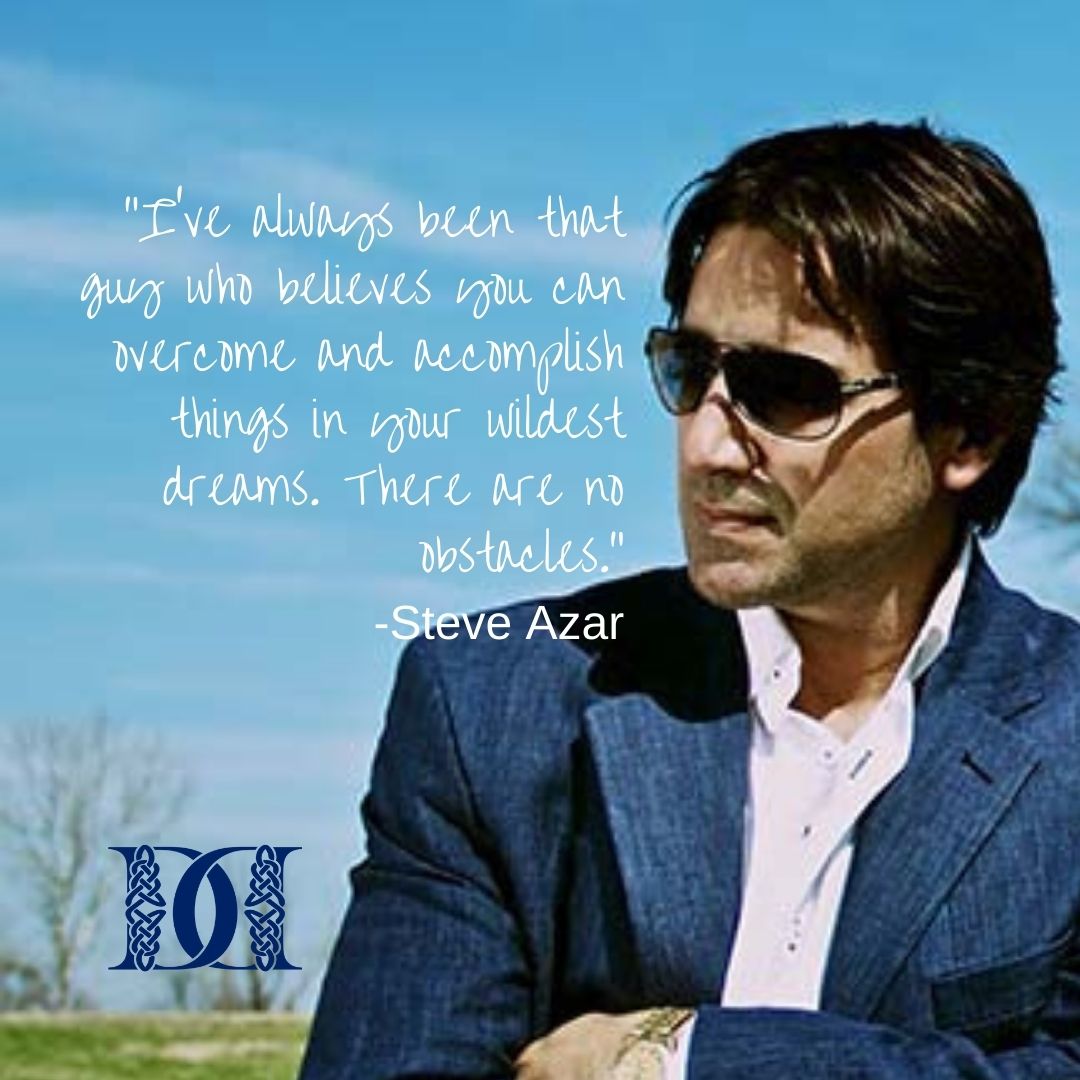 Steve Azar has an infectious kind of positive energy. When he’s excited about a project or a song, he practically bounces off the walls and you wonder if he ever sits down – or finds time to sleep.

Azar was born in the Mississippi Delta – the birthplace of the blues. When he was ten years old, he walked behind his dad’s liquor store and found this guy playing the blues.

“I didn’t know what he was talking about, but he was making everybody smile about it,” Azar recalls. “That’s the mark of the blues, it makes you feel good about your pain.”

From that moment on, he knew he wanted to be a singer-songwriter and began writing.

In 2002, he released the “Waitin’ on Joe” album that had two big hits – the eponymous single that featured Morgan Freeman in the video and “I Don’t Have to Be Me ’Til Monday.”

“I Don’t Have to Be Me ’Til Monday” was such an immediate hit, it shot to the top of the charts and continues to be one of the top five most played country songs on terrestrial radio, closing in on four million airplays. To put that in perspective: “American Pie” by Don McLean was released in 1971 and has around five million broadcast performances. And earlier this year, BMI recognized Dolly Parton for her iconic songs like “I Will Always Love You” (10 million plays) and “9 to 5” (5 million performances).

The funny thing about “I Don’t Have to Be Me ’Til Monday”: “It’s not something I ever would have said, but for some reason it came out of my mouth,” Azar laughs.

He wrote it down and the rest is history.

Azar credits that right phrase for coming to him at the right time because he was writing every day. Even when he wasn’t writing, he says his subconscious mind was working on song lyrics.

“The most important thing you have that got you started is your imagination, stuff just falls out. But you have to learn the craft and skill. Every day you write. Every day. As you’re doing that, you’re getting better,” Azar explains. “Great songs don’t just come as much, but the magic moment comes from all the work you do.”

It’s something he coaches up and coming musicians.

In addition to being a singer-songwriter, the Music and Culture Ambassador for Mississippi, charity event organizer, radio show and podcast host, Azar is a mentor and coach.

“People with talent can take it all the way if they work hard enough and have the right people around them. I get a charge out of believing in people,” Azar said.

He only mentors a few musicians at a time, and only those with the drive to succeed.

“It’s easy to spot when someone wants it. They work hard, are dependable, do what they say they will.”

Something he strives to do every day.

Azar spent 20 years in Nashville, but decided to move back to his hometown of Greenville, Mississippi so his kids could have the experience of growing up in the Delta. He also spends his time working with the Delta Music Institute and raising money for the arts in the Delta through his Delta Soul Golf Tournament every year.

When asked to describe himself in one word, he says he’s a “believer”.

“I’m a believer. I’ve always been that guy who believes you can overcome and accomplish things in your wildest dreams,” Azar said. “I was told in the business – ‘you can’t do that, it’s too hard’ – but I couldn’t believe that. If you show me something great, I’m all in. There are no obstacles. There’s only one result – success.”

Dawn Dugle is an author and keynote speaker.

This website uses cookies to improve your experience while you navigate through the website. Out of these cookies, the cookies that are categorized as necessary are stored on your browser as they are essential for the working of basic functionalities of the website. We also use third-party cookies that help us analyze and understand how you use this website. These cookies will be stored in your browser only with your consent. You also have the option to opt-out of these cookies. But opting out of some of these cookies may have an effect on your browsing experience.
Necessary Always Enabled
Necessary cookies are absolutely essential for the website to function properly. This category only includes cookies that ensures basic functionalities and security features of the website. These cookies do not store any personal information.
Non-necessary
Any cookies that may not be particularly necessary for the website to function and is used specifically to collect user personal data via analytics, ads, other embedded contents are termed as non-necessary cookies. It is mandatory to procure user consent prior to running these cookies on your website.
SAVE & ACCEPT