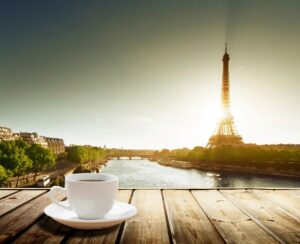 Sent to France for six weeks.

It sounds like the start of a young adult novel or a Netflix series, but this happened. And it changed my life.

I took French in high school – my tiny high school in the wilds of Indiana. Okay, not “wilds” per se – but we were in the country suburbs.

Only a few students lasted until our junior year, and I was doing pretty well with the language. Which prompted Mr. Martin, a member of the local Lions Club, to ask me if I’d like to go to France for their student exchange program. I would travel to France for six weeks and stay with four different families over the summer. That is if my parents agreed.

I thought that was the end of it until I came home from school one day. My mom yelled at me for saying no to an opportunity. She was furious at me for passing up something like this, especially since it wouldn’t cost us very much for the trip.

I yelled back, “In what world did I think you guys would let me go to France? By myself? I can’t even stay out past 11 o’clock without breaking curfew and getting grounded!”

It was an epic fight. Yet, two months later, we stood in the Indianapolis International Airport about to send me to France.

A different train of thought

It was 1990. I was 16 and traveling with two other 16-year-olds. One spoke very basic French. The other spoke Spanish.

We flew from Indianapolis to New York, where we were supposed to change planes and board the Air France jet to Geneva, Switzerland. Then, we’d take a train to Lyon, France, where our host families would be waiting.

Problem was – no one told us when we got off the plane in New York, we also had to gather our bags and re-check them through to Switzerland. Maybe someone did tell us that, but I don’t remember. And we didn’t do it. So when we arrived in Geneva, only two of the bags made it. The airline made arrangements to fly the bags to Geneva, then put them in a cab to Lyon.

The only thing now was to get the train to Lyon.

Jennifer and Suzanne, my traveling companions, let me lead the way as if I had ever been out of the country. We got our tickets, went to the train, got on board, and readied for takeoff.

Suzanne and Jennifer each had a piece of luggage that made it to Geneva. And between the three of us, we had six carry-on bags. Eight bags total. I was so glad my mom made me put a change of clothes and underwear in a carry-on… “just in case.” My money and passport were affixed to me in a very stylish leather fanny pack. Also, “just in case.”

As we waited for the train to take off, Jennifer began rooting around in the pile of luggage. Her purse was missing. That had her money and her passport. Without them, we wouldn’t make it into France.

“We need to get that purse. Jennifer, you and I will get off the train and catch the bags,” I told the group. “Suzanne, you start handing us the luggage!”

They all agreed. Jennifer and I moved quickly. When we turned around, the train doors closed and began to move. I ran alongside the train and told Suzanne not to get off the train because even though it stopped in downtown Geneva, it would continue to Lyon, France. Our destination.

Jennifer and I looked for her purse throughout the train station and the airport. We didn’t find it. I was just about to tap a very scary gendarme (armed military police officer) for help when we heard the train ticket lady yelling, “Mademoiselles!”

When we turned, we saw she carried Jennifer’s purse. Someone found it and returned it to the ticket counter. No money was missing. It was a miracle.

One thing that was missing? Jennifer’s passport. It’s at this moment she realizes it’s in the carry-ons that are with Suzanne.

“Mademoiselles, if you hurry and get on this next train, it takes you to Downtown Geneva. Your friend is on the train that is currently stopped. You may catch up with her there,” the ticket lady told us.

I couldn’t believe our luck! We hopped on the second train, the doors shut, and headed toward Downtown Geneva.

When we arrived, I could see the original train with Suzanne on it. We rushed up to the turnstile, which was also a customs checkpoint. The man in the booth asked for our passports. I looked at Jennifer. She paled.

“Sir,” I said in French. “Her passport is on that train with our friend who doesn’t speak French.”

At least I thought I said something like that. I probably asked for a sandwich or directions to the library. Either way, it worked. He shook his head, muttering something about “Americans” under his breath, and waved us through. Not even looking at my passport.

Jennifer and I hurried onto the train, the doors closed, and away we went toward Lyon.

It was a huge relief! We did it!

After a moment to catch our breaths, we began searching for Suzanne. My stomach started to churn when we were halfway through the train cars. We weren’t finding her. We went end to end. No Suzanne.

At this point in my life, I’d been awake for nearly 24-hours. I had no luggage. I was a hot mess and needed a shower. We were in another country and God-only-knew where Suzanne was.

Because I have a grim sense of humor, I began to laugh.

I laughed so hard I thought I’d pee myself.

I laughed for the entire two-hour train ride to Lyon.

My laughter scared the merde out of our fellow train passengers. They politely got up and went to another train car until only us Crazy Americans were left in ours.

When we arrived in Lyon, our host families wondered what happened to Suzanne. I was still laughing like a madwoman. Between fits of laughter, I told them what happened.

“Where is she?” They asked me.

They called the Downtown Geneva train station to find out if she was there. And she was with all of our suitcases and carry-on luggage. (To this day, I don’t know why she got off the train, but that’s neither here nor there.)

My host family was freaking awesome. They realized it had been a trying day for me and steered me toward their home. After a small meal that I don’t remember, I face-planted on my new bed and passed out. When I awoke ten hours later, I was looking at all of my luggage and carry-on bags. Everything made it.

I went on to have the most amazing experience in France. Seeing Paris, Versailles, a bullfight, some Frenchman thinking I was a prostitute because I shaved my legs, eight-course meals that lasted all day, and becoming fluent in French. It was fantastic.

I would have missed out on all of that if I had said no.

The moral of the story is: say “yes” to a good opportunity. You never know what you’ll discover along the way. Even if it is just a good ‘ole laugh.

Dawn Dugle is an Amazon best-selling author who writes romantic comedies with a body count.

Get Your FREE copy of "Extenuating Circumstances" a Flamingo Cove prequel

This website uses cookies to improve your experience while you navigate through the website. Out of these cookies, the cookies that are categorized as necessary are stored on your browser as they are essential for the working of basic functionalities of the website. We also use third-party cookies that help us analyze and understand how you use this website. These cookies will be stored in your browser only with your consent. You also have the option to opt-out of these cookies. But opting out of some of these cookies may have an effect on your browsing experience.
Necessary Always Enabled
Necessary cookies are absolutely essential for the website to function properly. This category only includes cookies that ensures basic functionalities and security features of the website. These cookies do not store any personal information.
Non-necessary
Any cookies that may not be particularly necessary for the website to function and is used specifically to collect user personal data via analytics, ads, other embedded contents are termed as non-necessary cookies. It is mandatory to procure user consent prior to running these cookies on your website.
SAVE & ACCEPT